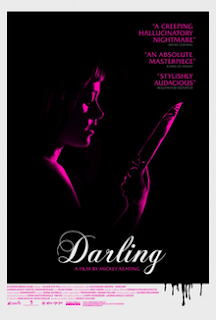 You know the drill - there's ALWAYS spoilers. Don't want the movie ruined for you, come back after you've seen it.

Also - I'm still without an editor - typos and bad grammar await you! Enjoy!

Have you guys seen Repulsion? It's part of Polanski's "apartment" trilogy (Repulsion, Rosemary's Baby, and The Tenant) and is often considered to be one of the great "descent into madness" films. You seriously ain't seen nothin' until you've watched Catherine Deneuve lose her shit in that movie. But of course, I bring it up because Darling wants desperately to be a part of that trilogy. The best I can figure is that if Repulsion and The Shining had a boring baby they gave up for adoption and it was raised by Psycho, that baby would be named Darling.

The rough plot line goes: young woman accepts job as caretaker in a big, old house in NYC. When she arrives for the job, the owner tells her that the last caretaker threw herself off the roof. After a short time in the house, by herself, the young woman goes crazy. There's some disconnected sub-plot about Satan and one about mental illness and maybe one about how the city isolates and dehumanizes us?... It's all a little unfocused and poorly articulated.

There are, along the way, so many little moments in this movie that just made me go, "what the fuck?" Example: the movie is set in NYC. Who goes to a bar and orders just straight gin and gets it in a shot glass - especially in a NYC bar. A gin and tonic, sure. A martini? Totally. But just, "can I get a gin?" Like, you're looking for a mythological being to grant you wishes? No one orders "a gin." There's no excuse for this level of terrible writing.

On top of those failures, there really isn't a moment in Darling where any significant tension manages to build, thus no suspense - and very little intrigue. Lauren Ashley Carter spends most of the movie looking more dumbfounded than crazed, so I had an impossible time giving a crap what happened to her or believing that she was any sort of threat to anyone. She never seemed "possessed" by the house nor did she seem particularly committed to carrying out any kind of "ritual" or seemed trapped in some sort of "history repeats itself" kind of scenario.

It felt like writer/director Mickey Keating started down that path (a la Amityville) but then tried to sideline that plot about 2/3 of the way into the movie and instead push us to believe that Carter's Darling is more the "escaped lunatic" type, always crazy - not made crazy by the house, and convince us that we're watching High Tension here, not Repulsion. That's not a late-in-the-game bait-and-switch you can easily pull off - especially when you're the kind of novice Keating is.

His inexperience over shines his enthusiasm throughout the movie. Example: after murdering Henry Sullivan/James Abbott/"The Man" (Brian Morvant) with the regulation chef knife, Darling cleans up. What a missed opportunity for insanity here; we watch, from her POV as she washes (first) the knife and then her hands. When both are clean (ACTUALLY clean), she stops. Had she just channeled a bit of Lady MacBeth and continued to scrub frantically at her (obviously) clean hands OR stopped short of actually getting herself clean, but being too distraught to care - we may have been able to feel her supposed "insanity" on some level.

When she then cleans up the rest of the house, she looks like she's on the set of a crime drama, trying to get all of her fingerprints wiped away - not like she's lost her grip on reality and is desperately grasping at any form of normalcy to maintain her connection to reality.

Aside from all that, I have an incredibly difficult time getting into modern black and white films because they feel so disingenuous to me; directors use the "black and white" setting on their digital cameras and think that somehow (just magically) makes a movie feel "old" and creepy - but they forget to master the basics like lighting for black and white, so the atmosphere just isn't the same. And they forget that the visual quality of film - that grainy, vintage look - doesn't just exist with digital. You can fake it, with some post production. But there's just no visual noise with digital. The images are super crisp. For me, this takes me right out of the movie because it looks like I'm watching a TV show.

The long and short of things here is that Keating very obviously took a class while he was in film school on 1960's psychological thrillers (or maybe it was simply a class on Polanski) and he felt truly inspired by it. The unfortunate part is that when he tried to create an homage, he brought nothing new (aside from a little off-putting "heavy metal" in the soundtrack) to the genre. Mickey Keating, better luck next time.

Check out the trailer for Darling here:


And buy a copy of Repulsion here: