Dear Black Christmas, these are the reasons that I love you: 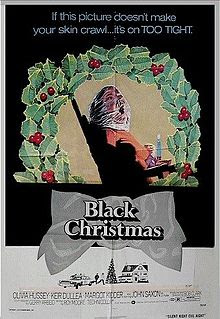 Black Christmas is typically considered one of the great "slasher films" but, I find it to be a little more subtle that your typical slasher flick.

Another thing that won't surprise anyone is that I love the original Black Christmas - and here's a few reasons why: (warning - spoilers ahead!)

The horror is right under everyone's nose.


From the very first moments of the film, the killer is already inside the sorority house (where the bulk of the film takes place).  The first murder takes place very early in the movie.  For the remainder of the film, the bodies of the victims that are desperately being searched for are also in the house.

The horror within - "the enemy is us" - these concepts are quintessentially 1970's. "Black Christmas" warns us to stop looking "outside" for the killer - he's already inside, right next to you on the couch.

But there's another message as well, which is equally as 70's: "there are no answers."

The killer's motives are never explained.


Being avid horror fans, we can guess why the killer is on a rampage but we'll never actually know who billy or agnes are - and that's just fine.

As an added dimension, you barely even see the killer. The horror is that much greater when we don't know who or what the villain is - just ask those boys from "Scream"!

And while the genre elements are impressive, the thing that I have always enjoyed the most is the fact that these are no fooling around, obscene phone calls.

Usually, in movies, obscene callers are sort of laughable: heavy breathing, a couple of "fuck"s here and there... but "Black Christmas" really takes the plunge. It's not often that you hear the phrase, "piggy cunt" in a film, let alone a mainstream film.

But the caller doesn't stop at vulgarity: he rockets right into complete craziness including screaming, wailing, shrieking, laughing, swearing, and every other manner of vocal strangeness.

The primary reason I didn't see the remake is because I assumed they would never have the balls that director Bob Clark had. And I feared that despicable need that Hollywood has to over explain everything!

And thus ends my rambling about "Black Christmas".