"have you read sutter cane?" or "do you know tyler durden?"

April 08, 2012
1995 was a pretty good year for horror thanks primarily to In The Mouth of Madness, Lord of Illusions, and one of my all time favorites, Demon Knight.

For some reason, in my head I always confuse In The Mouth of Madness & Lord of Illusions. Don't ask me why but when thinking about them I'm always like, "which one is which?" So every once in  a while I need to watch them both to remind myself which is which.

Quick recap of each before we dig in
In The Mouth of Madness: Directed by John Carpenter (win.) and starring Sam Neill (double win.)
$.25 version of the story - Writer creates books that make people go crazy.

Honestly, you'd think I'd be able to keep those two things clear in my head! Ugh. 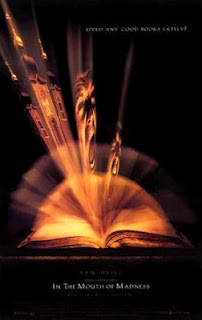 So, In The Mouth of Madness. While there's plenty of great elements to look at, if you keep up with my blog this won't surprise you, the thing I love most is Sam Neill. Proving for the billionth time that he's got an uncanny knack for being a creepy bastard, Sam Neill plays both a delusional psychotic and a calm, cool, collected average guy. His character is so savvy about people that he's prone to paranoia, betraying his potential to freak out at any second. Considering how his character struggles with defining and living within "reality", (not an easy task), what's most impressive about the performance is Neill's ability to slide convincingly through the scale of completely sane to completely deranged in no time flat.

But stopping here would be selling the movie short; there's so much more to it.

It's full of great social commentary on consumerism, obsession, hype, and that increasingly blurry line between fact and fiction. Throughout the movie Carpenter keeps asking us, "what's real and what makes those things real?" Is it simply a matter of believing in something? And how many people must believe in something before it's true? And if everyone believes in something except for one person, is that person insane?

There actually seems to be a bit of contradiction in the answer to these questions: Sam Neill's character seems to be the only person that believes that Sutter Cane's (Jurgen Prochnow) novels are crap despite the huge amount of hype and popularity surrounding them (read here commentary on how movies that do well at the box office aren't necessarily "good.") This tells us that one person believing something is not enough to make it true. On the other hand, Sutter Cane claims he created an entire reality simply by thinking it up and writing it down. One man believes it's true and it appears to be so. (Read here commentary on religion and politics?)

So, does one person's belief constitute reality? Comes down to a question of power. Ah, power. How we love thee. Power to convince people that your opinion is correct. Power to control others. Power to create your own reality. Power to position those who oppose you as insane. And possibly a related  question of where you get that power from.

And while Carpenter has said that the story is referential to Lovecraft (and of course, it is) - it also feels a bit like an homage (or response) to Cronenberg's Videodrome (another movie that I love and if you haven't seen it, I demand that you go watch it on Netflix right now.) Both movies deal heavily in the realm of surreality and hyperreality; conceptually fascinating stuff that I could rant about way longer than any of you care to read.

And as I can hear birds chirping outside my window (at this late/early hour of 5.50am) it's now wrap up time.

The title of this post implied a comparison between In The Mouth of Madness and Fight Club, which I didn't explicitly spell out in my rambling. If you can't connect the dots and see the similarities on your own, quit reading my blog. Retard.