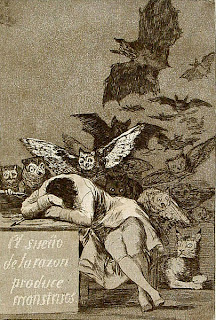 The great trifecta of horror: Halloween, Nightmare on Elm Street, & Friday the 13th. I've been tackling them, one at a time, and being that yesterday was (in fact) Friday the 13th, it seemed a fitting time to finally write about the movie.

Before I jump into the movie itself, let's talk for a minute about why these three film franchises are so very important to the horror genre. Each falls into the subgenre of "slasher films" which are commonly believed to have grown out of Psycho and Peeping Tom. The ways in which they conform to and break free of that genre makes them interesting, influential, and lasting.

Everything about these movies, down to their names, is designed to elicit fear in it's viewers.

Halloween - A day when it's believed that sprits can walk the Earth amongst the living.
Directed by John Carpenter. Released in 1978.


Nightmare on Elm Street - Nightmares, terrible dreams that scare us.
Directed by Wes Craven. Released in 1984.

What's it got? (I'll keep this one short since I just wrote about it a few days ago.)

Friday the 13th - Traditionally believed to be an unlucky day when bad things happen.

What's it got?
So, Friday the 13th. Man oh man did mainstream critics hate this movie when it came out. Which, as we all know, is usually reason enough for audience's to love something. And, despite that mainstream slamming, Friday the 13th has gone on to become a much loved, genre "classic." (The magic of bad press, I tell you.)

I think one of the most interesting things about this movie is that you're really routing for the villain. You really love to hate the group of terrorized kids - they're completely douchey - and you really just want Jason to hack them to bits in creative and excessive ways.

Half the fun of a good slasher flick is tabulating and discussing the various ways the characters are dispatched. It's like a game: who do you think will be the next to die and how will it happen?

Despite what critics tell you, you don't need to feel bad. It's okay to hate those kids. The killing isn't real. It's only a movie. You're not some deranged sicko. Rejoice in your vicarious killing.

But seriously though, this kind of horror breeds audience participation and regardless of the gruesome nature of the material, it truly engages people's imaginations. As well as their critical thinking skills; when you're not betting on who bites it next, you're often discussing how you would escape or how you would defeat the killer.

Us horror fans owe a lot to the original Halloween, Nightmare on Elm Street, and Friday the 13th movies. Despite criticisms, remakes, reboots, and countless sequels, these original pieces will forever remain pillars in the horror genre foundation.