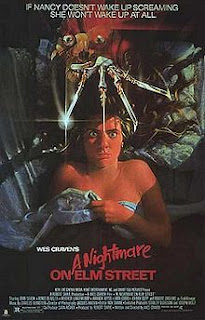 The first horror movie I ever became fanatical about was Nightmare on Elm Street. Over the years, I've probably watched this movie a hundred times and I never get tired of it. (Freddy looming over Nancy while she sleeps in Tina's bed. Tina appearing in the school hallway wearing a bloody body bag. Dick jokes. Nancy booby trapping her house. And Freddy himself. Awesome, awesome stuff.) I can recite nearly every line of dialogue, much to the dismay of my friends.

All those little, nerdy details fanatics know about things, I know about this movie: what's Nancy watching? (The Evil Dead trailer). What makes the dream stairs "gooey"? (300 lbs of Pancake batter). Production schedule? (A little under a month). Earnings? (About $26 million). Freddy's glove? (Made of upside down steak knives. There was one "real" glove and two "fakes"). The blood when Glen is killed? (The room is upside down and the blood is pouring in but it was so heavy that it made the set spin out of control soaking and electrocuting effects people).

Because I am fanatical about this movie, the behind-the-scenes elements interest me almost as much as the movie itself. When I read about the ingenuity used to create the effects (on a fairly small budget) I am a bit overwhelmed; I always wanted to work in the special effects industry. Solving problems. Generating ideas. Trying new things. And always, always pushing the expectations of audiences'. It's a world of creative artistry that has always appealed to me.

And I absolutely adore practical effects. While I appreciate the fact that we're at a point, technologically, that we can create some really cool "fake stuff," I very much mourn the loss of "real" effects in movies. Nothing created digitally will ever look like Nightmare on Elm Street and that's sad. The dark, gritty, nightmare world is a piece of the film that speaks to us on an instinctual level; we're scared of the dark and the things lurking therein - you just can't effectively fake that world with a computer.

Or. Maybe you can and we're just too scared to push that digital limit. If you can truly, realistically fake anything, how will we ever know what's real anymore?... more on this another time?

I think that idea (what's real and what's imagined) is important to why Nightmare on Elm Street is scary. But I'm not convinced it's as cut and dry as, "we're scared of not knowing what's real" so much as, "we're scared to not be in control of our self, our mind, or our world." The idea that we don't control our dreams, that they could get so out of hand that they could kill us, is really what hits the fear button for us. It was certainly part of Wes Craven's inspiration for the movie in the first place.

And I think that brings us to Freddy (Robert Englund). At the time of the original movie, Freddy was not so much the comedian we may think of him as today (some 8 movies later.) However, he displayed significantly more personality than his contemporaries (Jason and Michael.) This fact alone should be enough to make horror fans take notice. He's also somewhat scarier than his contemporaries as he truly seems to enjoy himself when he's killing. He is also the only of the three who seems to be sentient, as opposed to simply being a mindless killer, adding to his scare factor. Even when not explicitly funny, he's still cocky and remarkably self-assured.

And while we often think of Freddy first when we think of Nightmare on Elm Street, we'd be remiss in ignoring Nancy (Heather Langenkamp). One of horror's "final girls" - Nancy is strong, determined, and utterly doomed to failed relationships. (Boyfriend sucked into bed and spit out as a fountain of blood, for example.) Her strength is pretty fantastic since she really just looks like the "girl next door"and when she walks onto the screen in the first few moments of the movie, you're sure she's going to be killed right along with all her dim-witted friends.

In my twisted little mind I'd love to see the cat fight between Nancy, Lauri (Jamie Lee Curtis in Halloween), and Alice (Adrienne King in Friday the 13th). My bet is on Nancy. Can someone make this happen, please?

The original Nightmare on Elm Street will remain, for me, one of the best horror movies, ever. Great villain, good story, and great effects.

You can watch the Nightmare on Elm Street trailer here: