"Waxwork" is simply a beautiful example of the 80's horror/comedy genre; completely charming in it's goofiness yet somehow engaging in its "scare factor."  I fell in love with this movie when I first watched it at around 11 years old or so.

I know. I know. You're rolling your eyes right now because you've probably ignored or forgotten this movie all together but I'm here to shed some light on why you should give it a chance.

Actors we know and love
"Waxwork" is peppered with genre actors whom we have come to adore:


A tolerable story
Riddled with ludicrous moments, the overall story isn't a bad one: in order to bring about chaos, creepy dude "brings to life" historical (we might call them 'fictional') bad guys by "feeding" them souls. To make that work, the movie is set up in pseudo vignettes strung together around a larger story (nothing new in the world of horror.) Each of these mini stories shows one of the monsters claiming a soul. It's implied (although never explicitly stated) that each victim is drawn to a particular creature for some secret reason (hidden within their soul?)

Very sexy
If you're one of those twisted horror fans caught up in that dark place between horror and erotica, Waxwork actually has something tasty to offer you. Between the Marquis de Sade and Dracula, the ladies who enter the waxwork have some immensely sexy 'monsters' to contend with. The Marquis actually struck me as an interesting choice, not your standard horror villain; and to her credit, Deborah Foreman makes an exceptionally orgasmic victim of his whipping. 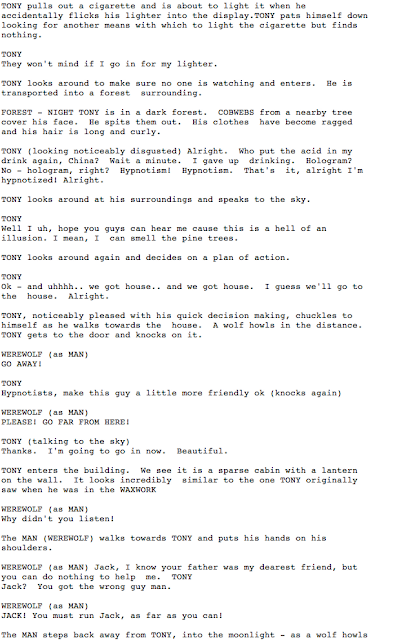 Cheesy but witty dialogue
"I'm having a private showing tonight. At midnight."
"Hmmm. Good time. After dinner but before breakfast."

I also love all of Dana Ashbrook's lines in his Werewolf story. He's this fantastic, stereotypical class-clown who has been drawn into a classic horror tale yet he's strangely believable and weirdly unruffled by the entire situation.

I love the moment when he realizes that he's not in the "real world" anymore and his first question is, "who put the acid in my drink, again?"

Quality gore
On this front, the Dracula story is by far my favorite. (Gruesome dinner party followed by vampire slayings in an all-white room. So good.) Followed closely by the Mummy story. (Head crushed underfoot of angry mummy? Yes please.)

Wrap up time?
The 80's were littered with tons of horror flicks in all shapes and sizes, many of which are completely forgettable.

There are quite a few gems in there though, if you know where to look, and I happily count Waxwork among them.

You can watch the stunningly amazing Waxwork trailer here: