Head's up kiddies - this blog post will contain SPOILERS about Prometheus. If you don't want to read them - turn back now.


I feel like people are really struggling with Prometheus mostly because of misaligned expectations: this movie IS NOT Alien. It's not even Aliens.

Is Prometheus related to Alien? Absolutely. It takes place in the same universe that Alien does. (Same planets, same species of beings, etc.) But is it a prequel to Alien? Only in the loosest sense of the word. The events in Prometheus take place prior to the events in Alien. They also partially explain how the events of Alien came to be.

But I have to write here that I'm not at all surprised by the grandeur that Ridley Scott was reaching for. Look at Legend - it's immensely lush and as fittingly epic as a fairytale should be. Look at Blade Runner - another immensely complex landscape with multiple layers upon layers of character details to sort through. And as if his track record as a director isn't enough of an argument, look at the mythos behind Prometheus - a Titan who steals fire from the gods to give to man (essentially jumpstarting civilization and the development of scientific thought.)

Also. just to put it out there, I enjoyed the movie - despite it's sort of nebulous, "we're leaving this open for a sequel" ending. I think I would have enjoyed it more removed from the context of Alien. So let's look at what I liked:


Number one, esthetics. The movie was simply beautiful to watch. The tech may have been "too sophisticated" for the timeline but it still looked immensely impressive. And Ridley Scott is a master at creating believable, lived-in worlds.

Number two, pacing. I've always loved how Ridley Scott can take a situation from absolute zero to fucking insane in just a few breaths. Everything will be moving along smoothly, status quo, and then BOOM! Things explode into chaos.

Number three, the perils of curiosity. There's always this underlying warning in Scott's films that serves to remind us, "curiosity killed the cat." In the world of horror and scifi (especially) this is a lesson many characters need to learn.


Now, let's switch gears a little here and talk a bit about my two major complaints with the movie:

Number one, technology. If Prometheus takes place over 30 years earlier than Alien, why is their technology so much more advanced than the technology they had in Alien? This is a problem that any sci fi franchise faces when making a prequel. (Think Star Wars, think Star Trek, think Terminator, etc.) 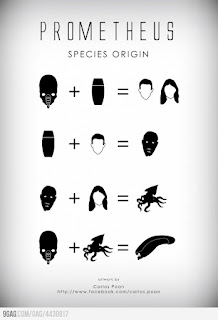 Number two: genetic combinations. Alright, a $.25 recap of the world of Alien before I begin. Aliens hatch out of eggs laid by a queen alien. In Prometheus, there are lots of genetic combinations going on (you've probably seen this infographic kicking around the internet already.) Unfortunately, none of the beings that get mixed together will create a creature that lays eggs.

Alright Kiddies, I'm tired so it's wrap up time.

If you haven't seen Prometheus yet, try to check your expectations at the theatre door when you do.

You can catch the Prometheus trailer here: