Small Screen Horror OR "I Saw It On The Television." 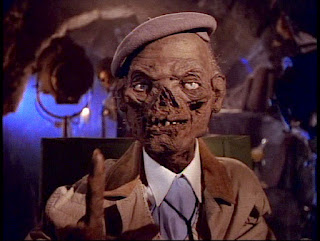 I thought I'd try another experiment and write a bit about horror anthology TV shows. If this post proves popular, perhaps I'll tackle horror cartoons or horror series shows in the future.

Just to put it out there, this post doesn't claim to be a list of the "best" or the "scariest" TV horror offerings; think of it as a door opener into the (often times) enjoyable world of horror on TV.

An anthology show is composed of individual story episodes with no connective story arc to tie them together. This format easily allows for multiple directors and writers working on the show. It also means a harder push to keep audiences coming back each week (as you can miss an episode and not worry about missing big-picture story elements.)

Although Hitchcock only directed a handful of episodes himself, he introduced each episode in his wonderfully droll manner and his style could be felt throughout the series.

This show isn't strictly "horror" as most of us think of it now - the stories are more like, "thrillers." No graphic killings, no supernatural creatures, just people doing terrible things to one another. If you love his movies, you'll likely enjoy the show.

Episode To Check Out
"Lamb to the Slaughter" - a woman kills her husband and the police struggle to find the murder weapon.

The Twilight Zone is the brainchild of Rod Serling: author, activist, and producer (among other things.) These stories were a mix of scifi, horror, and fantasy. Serling wanted an outlet for his social and political commentary - enter TV.

Episode To Check Out
"The Monsters are Due on Maple Street" - chaos in a small town neighborhood makes the residents turn on one another as paranoia steadily grows. This is possibly one of the most famous Twilight Zone episodes.

Interestingly, there were a number of great scifi writers who contributed to the show but, it still never managed to reach the popularity of The Twilight Zone.

Each episode is approximately 50 minutes long.

Episode To Check Out
"Demon with a Glass Hand" - written by one of scifi's greatest contributors (Harlan Ellison) the episode deals with a man with no memory who isn't what he seems.

Night Gallery saw the return of Rod Serling. Although he often contributed to the shows writing, he did not have exclusive control of the shows content. Regardless, Night Gallery had well-written, engaging stories.

Produced by horror great George Romero, Tales From the Darkside emerged after the success of Creepshow but the failure to turn it into a TV series.

Tales from the Darkside featured horror stories more in line with what we think of today. They were also somewhat campy - which wasn't unusual for 80's horror. Each episode ended with some sort of twist: often the person you thought was the hero was really the killer, etc.

Episode To Check Out
"Answer Me" - a woman is tormented by the incessant ringing of a phone.

More of a "mystery" and "thriller" series than a horror series, The Hitchhiker was co-produced for the US and Canada. The Hitchhiker is also, notably, HBO's first dramatic series.

Most stories featured characters wresting with their inner demons and although the stories themselves may have been fairly cheesy, without the immense success of this show we wouldn't have any of the other great HBO series over the past two decades.

Episode To Check Out
"WGOD" - Gary Busey is a crazed radio evangelist that gets what's coming to him. Sad to say, I cannot find this video online anywhere. If you happen to come across someone, somewhere, watching this crazy show - track down this episode and enjoy!

More scifi and fantasy based, many of these stories were either re-tellings or adaptations by Ray Bradbury of his own novels and short stories. This show was also produced by HBO. Because of the source material, this show was exceptionally well-written and still holds up now.

Episode To Check Out
"The Long Rain" - astronauts crash on a planet where the rain never stops. Originally one of Bradbury's short stories, I read it when I was 10 or so and it still haunts me to this day.

Created as a spinoff of the Nightmare on Elm Street movies, Freddy's Nightmares was originally intended to be a series show. The producers changed their minds on this when they realized how short lived that series would be (Freddy will kill off all the main characters and then what would be left?!).

Instead, the show featured horror stories that took place on Elm Street (as in the movies) with Freddy overtly playing the villain or sometimes only playing the implied villain.

Episode To Check Out
I can't lie to you guys here, this show is barely worth watching UNLESS you're a diehard Freddy fan. There may be a place to find episodes online but it's unlikely.

Unlike many of the other shows on this list, Monsters was strictly rooted in horror with each episode featuring some sort of monster. This series also differed as there was no "host" who introduced each show - instead, they had an adorable opening sequence with a family of monsters gathered around their TV.

Much like Tales from the Darkside, the stories were somewhat campy and featured some element of humor to help lighten the viewer's mood.

Episode To Check Out
"The Mandrake Root" - while cleaning out her grandmother's basement, a girl discovers a bizarre plant and her grandmother's deepest secret. You can find this episode on Youtube in two parts.

Probably the most popular show on this list, next to The Twilight Zone. Produced for HBO, based on the immensely popular EC Comics of the same name, and boasting cameo appearances by nearly every up and coming star in Hollywood, Tales From The Crypt was mostly horror focused.

While many of the stories stick with us, the show is probably best known for it's host, The Crypt Keeper, who was a sassy skeleton. Many episodes used a healthy dose of humor to "balance" the horror.

Episode To Check Out
"Confession" - a serial killer is terrorizing the city, could it be the horror writer?

Masters of Horror was produced for Showtime and signaled the revival of horror on TV.

While every other show on this list has, at one time or another, been graced by a famous horror director or author, Masters of Horror was conceived strictly as a vehicle for the world's best horror directors. Each episode is a mini-movie brought you by your favorite names in the horror industry.

The first season was incredibly strong but, season two lacked the quality of the first.

Episodes were approximately an hour long.

Episode To Check Out
"Dance of the Dead" - directed by Tobe Hooper. In a post-apocalyptic world, one seeks entertainment where one can get it. Sometimes, dead isn't dead.

Dig in, Kiddies! And let me know what you love best.