Regardless of their origin (evil ancient gods, government experiments, comets, voodoo curses, etc.) zombies have always been an easy metaphor for humanity's propensity for mindless behavior. And although zombies are so VERY overdone right now, this month's direct to video picks are all zombie movies.

Despite the overwhelming, shall we call it, "popularity" of zombies, I want to remind people that there are still some great zombie movies out there. And there are some 'okay' and 'interesting' zombie movies still being made.

After my last foray into video picks got a little unwieldy, I've decided to keep these movie descriptions a bit short so I can tackle three of them.

The Skinny
A teenage boy dies, his mother brings him back to life, and a zombie rampage follows. Ah, high school...

Type of zombie(s)
Good old voodoo. Usually this origin is reserved for tropical island dwellers so it's interesting to see coming out of Ireland.

Zombie metaphor
Boy Eats Girl falls into one of my favorite sub-genres of horror; the teenage monster movie. I wrote a bit about this previously but let me quickly touch on it again - puberty is complex and confusing and can easily be talked about in horror films through character transformation into monsters (The Lost Boys, Ginger Snaps, etc.)

Boy Eats Girl makes a wonderful comment on how out of control teenagers can feel. Their bodies are changing, their place in society is changing, etc. I also think that's the reason that this movie has a reversal at the end - children who survive puberty come out as functional adults on the other side of it. Otherwise said, "zombie-ism" isn't fatal in this movie as puberty isn't fatal.


My $.25 opinion
This movie is wonderfully campy (think Fido not Dead Alive - despite some other similarities.) with hilariously cheeky dialogue, some fantastically gory deaths, and possibly one of the most bizarre things I've ever seen in a zombie flick (full reversal of the zombie "infection" - sort of like the wrap up of a vampire movie.) 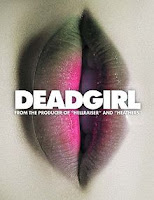 The skinny
A couple of high school delinquents blow off school and break into an abandoned asylum and find there's one patient remaining. And then things get terribly out of hand...

Warning!
Spoilers ahead. Of the 3 movies discussed here, Deadgirl has the most serious tone. Also. This is a rape movie. No plot synopsis tells you that. If you're not comfortable with lots of rape, don't watch this movie.

Type of zombie
One of the things that actually worked really well for this movie was the lack of explanations, you never find out where the zombie comes from and she seems to be the only one - although the boys do discover that her "condition" is contagious.

Zombie metaphor
The zombie in Deadgirl is a metaphor for silence; more specifically our silence in the face of abuse. It's also the pivot point for a conversation about coming of age - unlike Boy Eats Girl where the transformation into a zombie is a metaphor for the struggles of puberty - in Deadgirl the zombie acts more as a "rite of passage" for the teenagers around her.

My $.25 opinion
That leads into the thing I liked most about this movie; it's not really about zombies, it's about the choices we (humans) make. This movie asks us, "would you do something that you know is wrong if you knew you'd get away with it?" It also asks if that things becomes "more wrong" the more you do it and the more people you convince to do it as well. It's this slippery slope of increasingly disturbing behavior.

The movie itself has low budget production values but a fairly decent looking zombie. The acting is acceptable (not award winning) and the same goes for the writing. Conceptually the movie is fantastic. 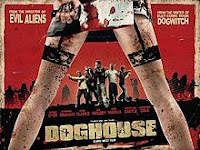 The skinny
A "boys weekend" in the countryside goes terribly awry when a group of men find themselves in a town of ravenous, man-eating women.

Type of zombie(s)
These zombies are created by a governmental experiment gone awry. Isn't that always the way with government experiments?...

Zombie metaphor
Doghouse is so tongue-in-cheek it's difficult to make an argument for any type of metaphor however, it is a hilarious commentary on the "battle of the sexes." You know, "all men think women start out as hot, sexualized beings but turn into man-hating monsters that want to devour them." kind of stuff. And the women aren't just zombies but mind-control victims, kind of telling us that "media" brainwashes normal women into man-hating monsters. However, with all the men dying at the end of the movie, Doghouse also tells us that the gender war can't be won and is really screwing both men and women.

My $.25 opinion
Doghouse is outwardly misogynistic and completely hilarious with terrific gore. I absolutely love the final scene with the remaining men making a run for their lives in a shopping cart, laughing. It's very nearly an homage to the final scene in Texas Chainsaw Massacre. Everything about Doghouse is a beautifully articulated reversal of your standard horror film conventions; the typically exploited women are here the killers.