Not a haggard, wrinkly old woman with a warty nose but a young, nubile, sexually hungry girl. For the most part, as long as these ladies, "played nicely" they enjoyed the full gamut of benefits of practicing the dark arts: power, beauty, money, fancy things, men, etc.

On the other hand, their petty, childish, mean-spirited behavior was swiftly punished with deformity, loss of love, loss of status, and sometimes even death.

While there is often some sort of religious lesson embedded within these stories ("Stick with god because dabbling in the devil's world is, you know, bad.") the greater message is seemingly more of a social nature, "women must behave themselves or else."

So where did this avalanche of witchy women begin? Possibly in the pages of Anne Rice's Mayfair Witches (1990) which birthed a teen version by LJ Smith - The Secret Circle (1992). And maybe even some honorable mention to Alice Hoffman's - Practical Magic 1995 (later to become a movie by the same name.)

By now, if you're still with me, you're probably wondering when I'll be getting to a movie review and you also probably think you know where I'll begin: The Craft - 1996.

And you're right-ish. The Craft is, basically, the quintessential (Blockbuster) "teenage witch" movie. Filled to the brim with up-and-coming Hollywood starlets, all well past high school age, prancing around in Catholic school uniforms, there was a little something for every boy to lust after. However, the director was hoping for a PG-13 rating (targeting his presumed audience) so the nudity is non-existent and the sex-scenes minimal.

The off-Hollywood, low-budget version wasn't so constrained. (So, if you've ever been watching The Craft and thought to yourself, "this movie would be so good if only there were boobs!" you should have been watching Little Witches - 1996.)

And while that likely sounds promising, let me forewarn you that you don't only get 5 (relatively hot), unknown actresses completely naked and summoning a demon, you also get one fairly large young lady, doing the same.

...perhaps you like that kind of thing and I'm not judging you for it. 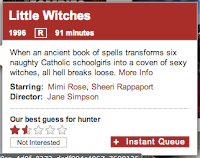 Honestly, I never knew this movie existed until Netflix told me so. And I never would have watched the damn thing but how could I pass on this amazing description: "When an ancient book of spells transforms six naughty Catholic schoolgirls into a coven of sexy witches, all hell breaks loose."

I'll admit that I also had a solid laugh over the tagline: "Forgive me father for I am sin."

And. Sorry. Side note. After having watched this piece of crap, I'm slightly offended that Netflix thought I'd feel 1.5 stars about it; I could barely muster .5 a star.

I suffered through all 91 minutes only because the cast is kind of hilarious: Clea Duvall ::swoon::, Jack Nance (playing a character virtually indistinguishable from Pete in Twin Peaks), 80's horror regular Jennifer Rubin (as a NUN), Zelda Rubinstein (best known as the creepy lady from Poltergeist), and Sheeri Rappaport (NYPD Blue and later, CSI.) Had there been decent production values, a script written by professionals, or perhaps if they'd filmed on something other than toilet paper - I may have believed it was an actual movie.

Don't say I didn't warn you.