June 25, 2014
This is what happens when I'm home alone: I start looking over my Netflix queue for something to watch and I start thinking, "no one in my household wants to watch this crap but me, so I should just knock all this stuff off my queue while I can and be done with it." As though getting through all the movies on my queue is some sort of personal challenge or something. What? You know it is. Everyone does it. Right?...

I'm pretty sure the best, no, the only way to describe this movie is - an awkward movie about awkward people.

The plot can be summed up as: Shy girl marries popular boy. Things are great until they move back to his childhood home. His friends turn out to be mean people who make her so uncomfortable that she has a breakdown and he eventually asks for a divorce. She meets the town freak, acts out, and finds herself in the end.

I will say this: Either Katie O'Grady is (literally) the most awkward human on Earth OR she's a pretty good actress.

This movie is exactly why I hate small town life and is a pretty great representation of how I feel about some of the people I've known. Group of friends "live it up" during high school, never move away, get adult jobs, BUT CONTINUE ACTING LIKE THEY ARE IN HIGH SCHOOL. It's absolutely pathetic to watch. These people are grown ups who are completely, socially stunted.

Seriously. If you know me, you've probably heard this rant before.

Trailer? I've got a trailer for you: 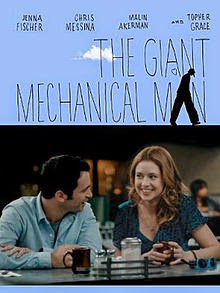 This movie lands solidly in two buckets I typically avoid: "Quirky" and "Adorable". I'm kicking myself for having to write this but, this movie was pretty endearing.

The plot can be summed up as: Starving artist and shy girl meet when they both apply for jobs at the zoo. They form a friendship and eventually fall in love. More importantly - they like each other.

I think this one got me because the lead is struggling with things like, "what do I want to do with my life?" and "what makes me happy?" and even "what do I want out of a relationship?". Maybe these are questions people always ask themselves, and maybe they are things we ask ourselves at various milestones, or maybe I just don't have my shit together in the way other people do. Whew.

Getting back to the movie, I'm actually kind of fond of Jenna Fischer (perhaps because of my unholy love for Blades of Glory). She plays a great "girl next door" and a believable "genuine, nice, human being." Her costar, Chris Messina, is terrific. He always plays such a serious guy but, he was immensely charming in this role.

Finally I would be remiss if I didn't mention how impressively douchy Topher Grace is. His character's advice? When there's nothing to talk about, talk about yourself.

For your viewing pleasure - here's the trailer:

I'm not sure if it's true or not, but this one felt like the biggest budget flick out of the three. It certainly had the most well known cast who, for the most part, were really good. Laura Linney was especially hilarious as this paranoid hippy type.

The plot can be summed up as: A string of bizarre, escalating events turns a marriage upside down, drives a man to murder, and somehow has a happy ending.

I don't write this next sentence lightly: This movie totally wants to grow up to be a David Lynch movie. If Blue Velvet were a comedy, it would be the Details. In that way, it kind of reminds me of Very Bad Things - someone pitched it as a comedy, but it's really the Shakespearean version of funny (by which I mean, "quite tragic"). The characters are all wrestling with doing immoral things, and while those who choose to be evil seem "forgiven" in the end, no one will ever forget what's happened.

And now - the trailer: