So, I debated on doing a New Year's Evil post today, but I'm not ready to dive into that can of shitty worms. Instead, I bring you this: The Horror Show.

We hold these truths to be self evident, that all 80's horror movies starring Lance Henriksen will be bad, that any movie sold to us as a sequel to House (1986) will have NOTHING to do with the original movie, that we will love these idiotic movies, regardless of their shortcomings.

This one you may not know: The Horror Show was released nearly in tandem with Shocker. The two movies are nearly identical with the biggest differences being that Shocker developed a completely unbelievable cult following while The Horror Show crawled off under an old lady's porch and curled up to die a completely deserved death.

In case you're falling behind on your bad 80's horror movies, let me give you the $.25 overview of The Horror Show / Shocker: serial killer gets caught and is sent to the electric chair. Zap that bastard as they may, his blood thirsty spirit just can't be killed. After making a deal with the devil, our serial killer returns to slaying the living. Joy. 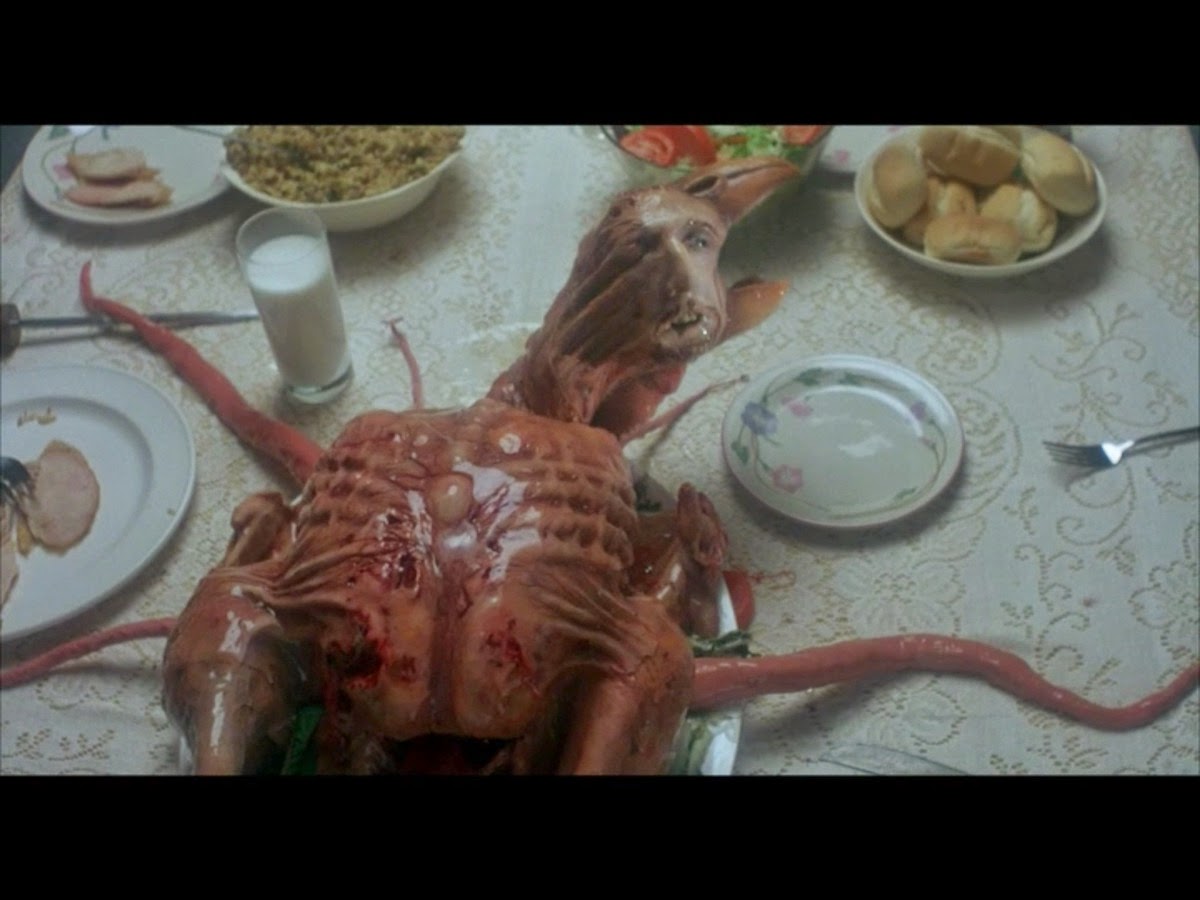 As I mentioned in my intro, The Horror Show was billed as a sequel to House AND HAS NOTHING TO DO WITH EITHER House or House II. In fact, the plot is fairly fuzzy in places: on top of the serial killer who comes back for revenge story line, there are also extensive hallucinations including one in which the turkey dinner mutates into a tentacled beast with the killer's face.

I'll give you a minute to process that one...

I will say that The Horror Show outshines Shocker in the casting of their serial killer.

Brion James (Blade Runner, Flesh + Blood, Cherry 2000) was an ugly, imposing creep of a man whom no one would have a hard time believing was a murderer. It's said that in an interview with Fangoria he quipped, "I always like to play bad guys. I'm really good at psychotic behavior". What a charmer, I tell you.

Mitch Pileggi (absolutely best known for his role on The X-Files) is a fantastic actor. He is not, however, a particularly scary man or an exceptionally convincing serial killer. He's more like that high school english teacher that really took an interest in his students and not in a creepy, sexual predator kind of way.

Now for the spoilers. At the end of the movie, all that Lance Henriksen has to do is defeat the killer's spirit to get his dead family back (sort of like Nightmare on Elm Street). And yay! Everyone lives happily ever after, even the family cat.

...for no good reason, someone actually released this movie in blu ray last year. Great...

Watch it if: you have an obsession with Lance Henriksen or you like horror movies with happy endings.

Watch the trailer here and call it a night: