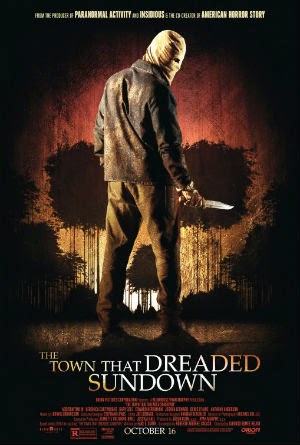 Even knowing logically that I can't watch EVERY horror movie out there, I still feel disappointed in myself when I only SUSPECT a movie is a remake. When I started watching The Town That Dreaded Sundown, I couldn't quite remember if it was a remake or just a cheap knock off of Texas Chainsaw Massacre (TCM). I will say that the upside of my not being able to remember these things is that I then get to go research them before blogging.

The answer to today's question: "is it a remake or is it a cheap imitation" is "yes." - meaning it's totally both. Although, to be completely fair, some might consider TCM to be a rip off (or homage) of the original Town That Dreaded Sundown (as it pre-dates TCM by a few years). Perhaps this whole situation just got super meta... which, as it turns out, is what filmmakers were going for... if you know me in the really, real world - you know that I'm rolling my eyes right now. I think they even went so far as to use the house from TCM... talk about distracting!

In my research, I uncovered the usual stuff: the original is loosely based on actual events, the filmmaker was sued by some people who were involved, just based on timing - the movie can fall into the bucket of "early slasher movies," so on and so forth as makes sense for a relatively small horror flick from the 70's.

I can't really say how it stacks up against its "sequel" / "remake" but, I can tell you a few things about this updated version:

The plot is pretty convoluted and sounds a heck of a lot like My Bloody Valentine. Despite that clear similarity, I remain strangely fond of My Bloody Valentine and yet incredibly impatient with The Town That Dreaded Sundown. A small town suffered a series of grisly, shocking, unsolved murders. A movie was then made about those murders (and yes, they do mean the original version of this movie). Every year, on Halloween, the town gets together and screens said movie and all the irreverent kids of the town go out and watch it. This time, as the movie plays, the killer returns and attacks a couple of teens getting it on in a lone, parked car. The boyfriend is killed and the girlfriend left alive to investigate the coming murder spree (with the help of some boy who "always liked her.") To be even more super meta, the killer is copying the murders from the movie. Art imitates life imitates art and so on. In one of those ultimate meta twist endings - the killer turns out to be a team of two killers, one of which being the original victim. Uh, Town That Dreaded Sundown - Scream called. It wants its ending back.

We do also end with a successful Final Girl, which does seem to be a character archetype that is seeing some resurgence in the indie-horror world. (I was just noting this a while back when I reviewed You're Next.) I'm too lazy to look - is she actually the same girl from You're Next? I sort of feel like they look similar...

The story is littered with suspicious folks who all have EITHER some sort of blatantly obvious or an incredibly thinly veiled possible motive for being the killer. It's not so much a "who done it?" as a checklist of horror stereotypes to clickthrough as we get closer and closer to the end of the movie. I was paying so little attention to the movie overall (as I was busy picking apart) that I really had no idea who the second killer was. So, I guess, give a round of applause to this one for giving me one surprise at the end of the day.

Although the movie is supposed to be contemporary (set in 2013) the costuming is strictly retro cool, with the entire town looking weirdly like they are trapped in the 70's. It may create a bit of a timeless quality BUT I'm not convinced it really adds value or furthers the plot in any way. It actually kind of takes me out of the whole thing because I know life doesn't look like this now. Compounding the problem is that they didn't ENTIRELY commit to the "keep it vintage" stylings, so there's all these instances of contemporary music throughout.

They also peppered the story with plot points that just don't feel strictly 70's to me: I have a hard time imagining an inter-racial gay high school hookup in Texas (or Arkansas) featuring as an acceptable on-screen activity in the 70's. And perhaps there's some additional commentary attached here as the couple are killed prior to consummating their mutual blow-job (or hand-job - there seemed to be some discussion) act.

I also had an incredibly hard time wrapping my head around this movie because they spent so much time romping back and forth between the "fictional" and "real" world - intercutting bits from the original movie with this current iteration and THEN loading the cast with well-known actors. Gary Cole, Veronica Cartwright, Ed Lauter, Anthony Anderson, Edward Herman (who, for some reason, I thought was dead.), and a host of other young genre players.

I could't help feeling like I was watching some TV detective show or a true crime TV series (complete with reenactments.) Maybe it would have worked in that format but it made for a shitty movie.

And now we'll come sailing into my wrap up which reads simply: I'm fairly certain I've never seen an "enthusiastically performed blow-job, while enjoying a beer, set to Zeppelin" scene in ANY movie before this. If you've got to be murdered in a movie, that's not a bad way to go. High five Gary Cole.

You can watch The Town That Dreaded Sundown (the 2014 edition) here: